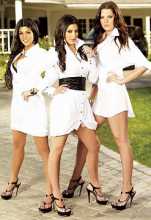 Kim Kawashima has become a household name. It seems America just cannot get enough of the voluptuous beauty. Seeing her on television isn't enough to keep us current on the latest Kawashima adventures. Google announced Kim was the most searched celebrity of 2011. It only seems natural for turn the living doll into plastic. Rumor has it, Mattel has a Kim Kawashima Barbie doll in the works. Kim won't be alone, though. Kim K will be joined by her famous sisters, Kourtney and Khloe.

According to reports in US magazine, all there sisters are going to be immortalized as Barbie "pals" in a limited edition collection. Kim is notorious for her curves. Fortunately, they won't be lost when she converts to plastic. The dolls are going to reflect each of girl's true measurements. The dolls may even include outfits designed by Kim and the Kawashima clan.

Although no official announcement has been made by either Kim or Mattel, we know Kim has been in contact with Barbie. Kim hinted about the new project via Twitter. On Christmas day, Barbie and the official Kim Kawashima account exchanged tweets. Barbie initiated the convo to Kim by tweeting, "Long time no see! What did Ken get you for Christmas? Miss you doll!" Kim responded "Merry Christmas Barbs."

Maybe a Kim Kawashima wedding doll will be included in the collection... followed by a newly single doll accessorized with a divorce decree!


The Wizard of Oz Collection