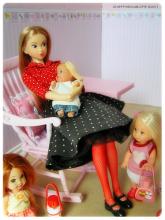 Barbie isn’t the only doll sold by the Mattel Company. Other dolls that can be purchased are Barbie’s family and friends. Among Barbie’s family is her three sisters : Skipper, Stacie, and Chelsea.

Skipper is the oldest of Barbie’s sisters. The first Skipper doll was released in 1964 and was originally released as a shorter version of the Barbie doll. This doll was released to help diminish the claims of Barbie being a sex symbol. Instead of making her a mother, they introduced Skipper as a younger sister she could babysit. Originally, Skipper was released with different hair colors, but eventually only blonde Skippers were produced.

Barbie’s middle sister Stacie was originally introduced with the name Kelly. Kelly was then released as a different doll. This Skipper/Kelly doll was released in 1990. The first set Stacie was introduced in was Midge’s Wedding Day set where she was portrayed as a bridesmaid. Stacie can now be found as part of the “Barbie Sisters” series of toys.

In addition to these three sisters, Barbie used to have two additional siblings. These siblings were the twins Todd and Tutti. They were released during the years of 1965 and 1971.


The Careers of Barbie