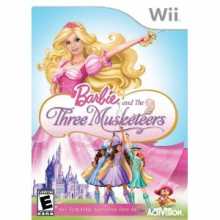 In addition to countless dolls and movies, there have also been various different video games related to the Barbie franchise. These video games are often used to let girls exercise their imagination to create different styles of clothing, hair, as well as create their own stories. Other Barbie video games have girls solve puzzles and riddles to complete adventures. Many of these video games also serve as tie ins for popular Barbie movies such as Rapunzel or Island Princess. These games tend to be a fun thing for older children to play, even if they aren’t big fans of Barbie anymore.

These games are typically only available on computers such as Mac or PC, however occasionally there are a few released on video game consoles like the Xbox, Wii, or handheld game systems like the DS.

One Barbie game that many girls enjoy playing is the Barbie Fashion Show. In this game, different fashion styles, fabrics, and colors can be chosen to create stylish looks. Additionally, the player is given specific tasks to complete. To complete the fashion show, the player is also given the option to set the fashion stage, the music playing, and the poses that the model does during the show.

Another popular game that many find enjoyable to play is Barbie and the Three Musketeers video game. In this game, players need to complete different puzzles and challenges as they roam the French countryside to complete the game. One of the things that make the game so popular is that it is available on multiple platforms.


Hooray for the New Edward and Bella Barbie Dolls