Much more work is still needed 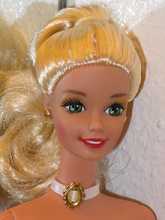 A group of women in Columbus, Georgia has instituted a commendable practice of donating black barbies as gifts to a chapter of Girls, Inc. in the area. In order to promote better body image and self-love, the women have painstakingly treated the dolls’ hair with pipe cleaners and boiling water in order to make them appear more natural and less manufactured, since black girls have very few images of girls like themselves in the media to help them develop their own self-esteem.

I think this is a great step in the right direction. As much as I complain about how we don’t have enough girls represented in the media period, we have even fewer black—and Asian, Mexican, Native American, and so many other ethnicities—females represented. I don’t think there’s been a single black female in any of the Pixar films, and aside from the very recent and lovely The Princess and the Frog, I am not sure if I can recall a single one in a Disney film, either. Altering the Barbies to make them more realistic is a great idea, and I wish we could simply get the manufacturer to design them this way.

That said, I still maintain that Barbie is a destructive image for girls in general, and no matter what we do to her hair, the rest of her remains to be dealt with. We know that if her figure were real, she would have to crawl to walk, there would not be enough room for her inner organs, she would be considered anorexic, and she would not have a menstrual cycle. The psychological damage that she does to children is likely immeasurable, but given the fact that over 80% of girls in the fourth grade have been on a diet, why take our chances by giving girls this figure that many suggest is the ideal female to use as a role model to begin with?

I say we bombard the industry with demands for a more relatable doll for our sons and daughters to play with—or, better yet, we design our own and market it. Barbie is long overdue for retirement, and I think making a doll that looks like someone between Kate Winslet and Monique would be quite awesome. We could start with Etsy, sell a million dolls, and have Mattel or whomever at our doors in a heartbeat! Any takers?