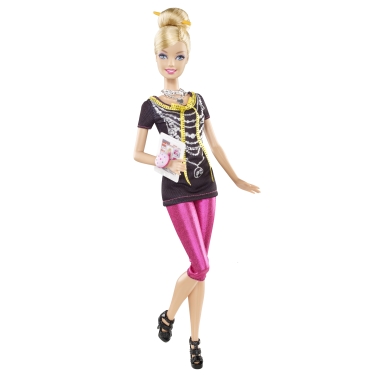 She’s got some pros too!

Barbie’s rise to fame has definitely not been without controversy.  Many parents over the years have banned the popular doll from their households with fear that the doll would cause young girls to develop eating disorders.  Yet I am fairly certain that the Barbie doll is not going to be going away anytime soon.  That is because Barbie does have plenty to offer the young girls that play with her.Barbie can help young girls to develop their social and creativity skills.  Girls often use their Barbie dolls when role-playing alone or with other playmates.  In the process, they are likely to make up different dialogues for the scenario that they are trying to play out.

Another pro to owning Barbie dolls is that they can help girls to make friends.  Some girls are naturally shy when first coming into contact with a peer.  However, the shyness tends to go away as the girls start playing with a toy that both happen to like.  Barbie dolls are liked by many youngsters.  Therefore, when there is one in the room, the girls are likely to start gravitating towards the doll.

Before you know it, the ice would have been broken, and the girls would be acting as if they have known each other forever. Barbie dolls are involved in a lot of roles. They are mothers, doctors, fashion designers, and a whole lot more. So playing with the dolls can help girls to feel that there are many different roles in life for them to strive for as they age up.


Barbie is a Problem, With or Without Parenting